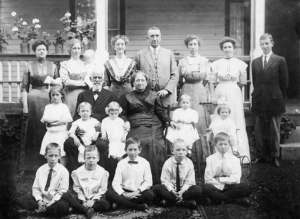 1875 – House was constructed for Stephen J. Shelton by Henry Napoleon Francis. Stephen was High Sheriff of Haywood County, taught school, farmed, fought in the Civil War, served as the Superintendent of the Methodist school that replaced the Greenhill Academy  ( located at what is now Greenhill Cemetery) and was active in the Town of Waynesville.

1905 – House was purchased by Will Taylor Shelton from his father.  Will and his wife Hattie expanded the house to include four additional bedrooms, three bathrooms and, built the apartment and the barn. He used the addition to open a Boarding House which often housed Attorneys and Judges who traveled to Waynesville, the County Seat, for court.  Will also operated a dairy farm in Waynesville after he retired as Superintendent of the San Juan Northern Indian Agency in Shiprock, New Mexico, where he founded the Shiprock Reservation and School.

1944 – House was willed to Charles E. Ray, Jr., a nephew of Will Shelton. House was used for community affairs and rented as residence

1977 – House was purchased by Mary Cornwell and a Board of Trustees. Mary Cornwell founded the Museum of North Carolina Handicrafts

2017 – House, Barn, and Grounds are operated as Museum and Events Center