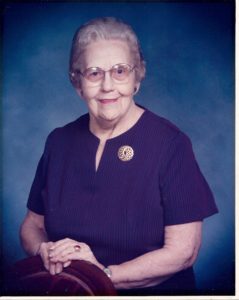 In 1942, around the age of 30, she came to Murphy as assistant home demonstration agent for Cherokee County, NC. One of her first jobs was to relocate families displaced from their farms and homes by Tennessee Valley Authority Dam Projects. In 1949, she was transferred to Haywood County where she worked as home demonstration agent until her retirement in 1976.

The Village of Yesteryear at the NC State Fair was organized under her direction in 1951. It began with fourteen craftsmen and grew to over one hundred who demonstrated their finest heritage crafts. She served as director until 1988 when the NC State Fair was dedicated to her for “loyalty and devotion to the fair.” The Village of Yesteryear is still a very popular exhibit at the state fair having grown from a wooden shed to a brick building.

She was instrumental in the organization of ideas begun by Haywood County Extension Homemakers Clubs to develop a place to preserve and display the mountain handicrafts. Mary’s vision was to establish a repository at the historic Shelton House to preserve and display traditional crafts created by the state’s most renowned artisans as well as the Shelton family collection of Southwest Native American artifacts.  Her vision was to build a 2 story log building on the HCC campus.  BOE restrictions prevented this and so they purchased the Shelton House.

Mary Cornwell was honored with a multitude of awards over the years, including the U.S. Department of Agriculture’s Superior Service Award. The National Association of Extension Home Economists gave her an award for outstanding service to rural communities.

In 1989, around the age of 77, she was given the Mountain Heritage Award by Western Carolina University’s former chancellor, Myron Coulter, who said, “Few people influenced the preservation and exhibition of crafts as profoundly as Mary Cornwell.”